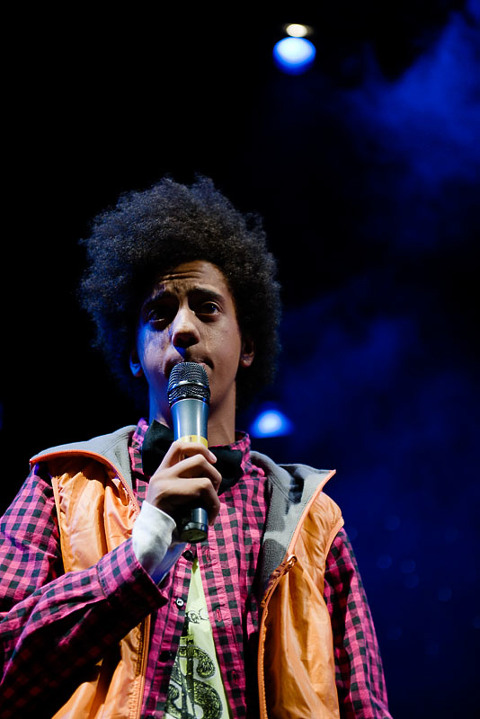 Here’s a selection of some of our directing work (for full list see bottom of article):

Paul Merton (with Suki Webster, Richard Vranch, Lee Simpson)
I have worked with Paul twice – once on Out of My Head (alongside the performers above) prior to the show going into the Vaudeville Theatre, West End in (2013). Also on My Obsession – a play written by and co-starring Suki Webster. This premiered at the Edinburgh Fringe in 2014. Out of My Head included a series of sketches, drawing on experiences from Paul’s life. This was a very different (but no less fun) experience to working on My Obsession, which played in much smaller venues and was far more narrative driven. We stayed and rehearsed for a week at Suki and Paul’s house in Kent, so it was quite an intensive process!

Firebird Theatre in Faustus
Firebird Theatre is a company of 16 disabled actors, based at the Bristol Old Vic. I was helping them to devise and direct their own adaptation of Faustus. The approach was similar to any other devising process, working to the strengths and varying energies of individual cast members. We approached Kathryn Hunter to work with us in a workshop capacity and I’m very pleased that she is now one of the company’s patrons and recently performed with them. More info here

Nina Conti
Nina had acquired a selection of new ventriloquist puppets and wanted to explore/discover their characters with a director. I spent many hours interviewing the puppets, continually being reminded by Nina that they weren’t independent of her (we use this kind of ‘hot seating’ approach quite a lot to find characters in Peepolykus shows). We then began to write down the funny stuff and shape the material into a show – Dolly Mixtures, that ended up being structured around the idea of ‘’The 7 ages of man. The show begins with a nine-year old version of Nina herself who is contemplating how possible it is that she exists (originally the show contained a pre-recorded Skype call with professor Brian Cox) and ended with an old man puppet shredding himself in a tree shedder. Throughout the rehearsal period, Nina would try out bits of material in comedy clubs. The show then toured to mid-scale venues all over the UK and was recorded for DVD.’ 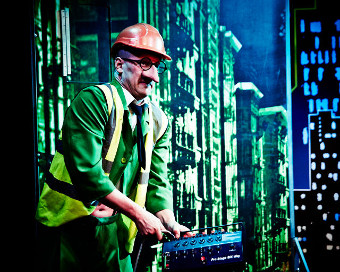 We’ve worked with Le Navet Bete (pictured right), directing, devising/writing on four shows. This has sometimes been about shaping existing material and sometimes working from scratch on a new show. They are very much an ensemble (4 guys) and the task is to maintain the energy and complicite which has earned them a loyal following but also to develop their style for bigger and more commercial shows. More info here

Natural Theatre Company in Astronomer
Sometimes we work on site specific/intervention shows. Astronomer was a community project, commissioned by Bath Fringe Festival alongside The Natural Theatre Company. It took place in central Bath (for one day) and revolved around the idea of a satellite (that had gathered information about the origins of our universe) falling to earth (which it did). We created a society called The Bath Astronomy Society who set up camp in central Bath on a busy Saturday morning and thereby fuelled speculation about what might happen towards the end of the day. The devising process involved creating characters and business that would look authentic to an unsuspecting public (but whom would gradually became aware of the fiction/theatre). Blurring the line between performance and reality is something that greatly interests Peepolykus.

Shaun the Sheep. The task was to work with Aardman and Dan Colman Productions to adapt the Shaun The Sheep brand into a live arena stage show.

We worked with a British team of actors to devise material that was then taught to a Serbian cast who then opened the show in Egypt. The show was wordless and the actors were in big costumes and masks.

There were huge challenges in the creation of this show, not least language and cultural barriers. However, Shaun the Sheep provides fantastic source material and a wonderful world to play in.

Footage opposite shows the performance in Qatar