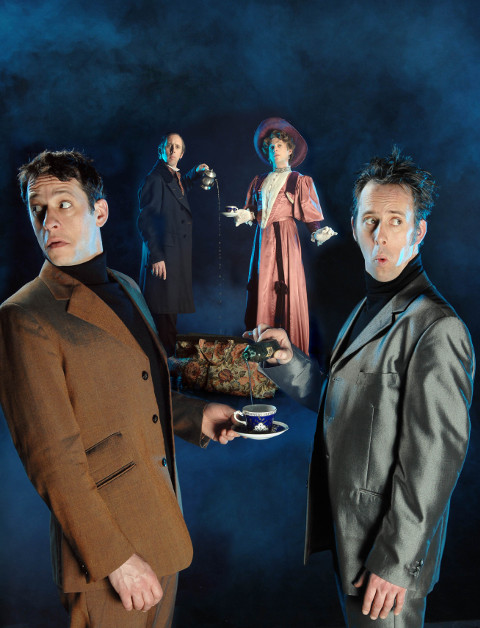 The original Artistic Directors – John Nicholson, Javier Marzan and David Sant – devised and wrote their early shows alongside a director (brought in for each show). Sometimes the company have performed other people’s plays (Eugene Ioneso, David Ives) and in recent years, John Nicholson, Javier Marzan and Steven Canny (in various combinations) have adapted existing stories texts (The Hound of the Baskervilles, Madame Bovary) as well as written original plays (Spyski, Or the Importance of Being Honest, No Wise Men, The Arthur Conan Doyle Appreciation Society). 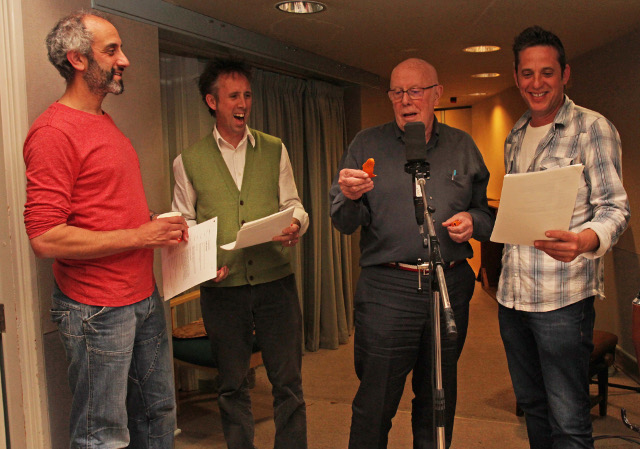 Radio
For BBC Radio 4: Marley was Dead, The Hound of the Baskervilles, Rik Mayall’s Bedside Tales (series), A Trespasser’s Guide to the Classics (series)>

Our first foray into radio was an adaptation of A Christmas Carol. It was broadcast on Christmas Eve 2012 on Radio 4. John Nicholson and Richard Katz played the skeletal staff (continuity announcer and producer) who were running transmission. The broadcast appeared to be going out live. When their friend Javier Marzan comes in, a large jug of Eggnog destroys the studio equipment, resulting in the fact that the star studded recording of A Christmas Carol (from St Martin in the Fields) can’t be transmitted. After Chris Evans and Richard Madely phone in demanding that they get things back on track, the team are forced to improvise. They do put out A Christmas Carol by dramatizing the story themselves with the help of well known voices who call in – Jonathan Dimbleby, Dara O’Briain, Jane Horrocks, Edward Kelsey, Charlotte Green, Peter Purves, Gwyneth Thompson (Radio 4 controller).

The idea behind this play was to see if the clowning approach to theatre (attempts to save the day when all goes wrong) would translate to radio. How could we effectively remove the fourth wall in a written comedy on radio, we wondered. This led to the idea of writing something that appeared to be going out live. Our brilliant producer Sasha Yevtushenko took us on a tour of the live studios at radio 4 and we chatted to continuity announcers about their responsibilities, tasks (and fears of things that might go wrong!). We wanted the ‘breaking of radio 4’ to sound as authentic as possible. Thereafter we wrote the script with certain people in mind and then hoped that they would agree to record their phone in parts. Thankfully (and amazingly) most of them agreed and Sasha had lots of fun tracking people down at BBC functions and dragging them into cupboards with a microphone to record their bits. The result was a skewed but nevertheless very faithful adaptation of A Christmas Carol.

With our series, A Trespasser’s Guide to the Classics, we wanted to develop this idea of taking classic texts and being mischievous with them. We wanted to create an intervention, a derailment, and then be forced to pick up the pieces. In the first series we chose 4 titles that went out as 4 separate episodes – Madame Bovary, Robinson Crusoe, The Picture of Dorian Gray and 1001 Nights. BBC Radio 4 have commissioned a second series of A Trespasser’s Guide to the Classics which is due for Transmission in early 2017.

Listen to the first episode of our radio comedy The Trespasser’s Guide to the Classics here or go straight to our Soundcloud page to listen to the rest of them.

Here’s one of the many ideas we improvised and filmed in one day. Spot the guinea pig. He’s called Bibbles. He’s got an agent.

And this series of sketches was commissioned by Cornershop TV for BBC online: